Thoughts on Progression and Player Choice 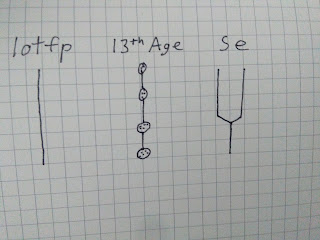 Here's a graph representing how I see class progression across three games: Lamentations of the Flame Princess, 13th Age, and D&D 5th edition.

Lamentations is probably the most simple and straight forward. No player choice at all; it's a straight line to the top baby. However specialists, magic users, and clerics have some form of choice. The first gets skill points. The second and third get more spells. However I'm not sure if this level of freedom fits within my definition of player choice. Player choices should feel significant and effect gameplay and I just don't feel that the choices offered by these classes is either. They feel more like an illusion of choice, i.e. you're making a choice that ultimately doesn't matter.

13th Age is probably on the opposite end of the spectrum compared to Lamentations; choices are abound. For some classes the choices are tiered; Talents are different from Maneuvers witch are different from Feats which are different from etc. etc. The choices here are significant because they basically let you cheat. Missed an attack? Nope! Roll you're weapon damage anyway. However you only get to do it once per combat which I think is fair. Upsides are that each player's character feels unique; even if you lay up two barbarians next to each other they'll probably be very different. Downsides are the big lists which bring min-maxing to mid. Which feat is the best? Which isn't? And that kind of thinking can be unwanted at the table.

5th edition does something unique in that it doesn't eliminate player choice at all and it doesn't overwhelm players with dozens of options. Instead at a certain point it makes you make a decision and you're set on that path permanently going forward. This lets players explore their options without feeling overwhelmed nor does it let them feel oppressed by being stuck on a single path. Good Stuff.

My ideal game would fall somewhere in between 13th Age and 5e. I love the customization of 13th Age but don't care for the big lists. At the same time I like 5e's method, but would love to experiment with customization more.