The Hunt for Moorcock

I've begun my foray into the works of Michael Moorcock with Elric Melniboné and Other Stories. It's the first of a series of collections that tell Elric's story in chronological order. I'm glad I found it because otherwise I would have had to scrounge up the old books, and a wizard seemingly cast an enlarge spell on their price tags, and my local library keep pulp fantasy at bay with a 10' pole.

Anyway the reason for this post is the dapper gentleman: 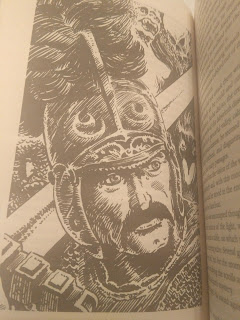 It's no surprise that nerds fetishize guns. Batman says it best:


Problems crop up when elf games take it too far. Take for example this list from d20 modern: 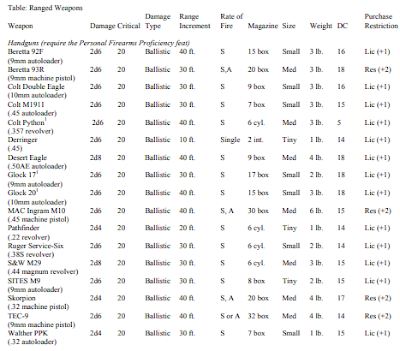 Now I'm the kind of guy that can never tell the difference between your Beretta 92F and your Beretta 93R, but I do know they both do 2d6 damage. Quick story: I was playing Call of Cthulhu and a friend of a friend asked me why I chose a lower caliber rifle or a higher caliber one. My answer: "They do the same damage."

So if my experience is any indication of the collective elf gamer experience, I should avoid large lists of letter-followed guns with overlapping damage arrays.

The only gun list that's come close to fulfilling my goal is Classic Traveller's: 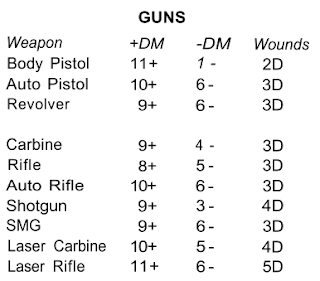 That's all the guns by the way. Such a succinct list; it almost makes me swoon.

This list establishes a few things. It completely ignores model, manufacturer, and caliber, and throws out any notions of "simulation." (Albeit this just makes sense for a sci-fi game set thousands of years in the future. It's still a good rule of thumb.) It has a movie-goers idea of the way damage die progress. As I said I'm no gun expert but I know a laser hurts more than a shotgun hurts more than a rifle hurts more than a pistol.

The only problems with this list is its elaborate matrices that modify attack rolls based off effective range and distance. This is ineffective for a game like Variant that prioritizes simple strategy above anything else. Also damage takes the form of multiple d6s, which in the late 70s was an effective method of generating random numbers but our polygonal overlords have since taken over.

Anyway on to solutions.

Pistols, d6
Your standard pistol. Pistols are the only firearms you can effectively conceal and dual-wield. In the case of dual-wielding, you roll two damage die, taking the better result or adding them together if they are doubles.

Rifles, d8
Rifles are the standard affair when it comes to equipping armies. They are more effective at long range than pistols.

Shotguns, d10
Shotguns are more effective at clearing out groups of opponents but only within close quarters. If you're in a blocks-spanning shootout you're better off using a pistol or rifle. But the tight-corners of a building or dungeon is where shotguns shine.

Lazers, d12
Lazers are the ultimate hurt when it comes to firearms. They are capable of turning adults into minuscule piles of ash.

Explosives, d20
Explosives are a catch-all term for dynamite, grenades, mines, etc. Explosives are deadly against groups of opponents. When an explosive goes off you roll a d20 for everyone caught in the blast radius and deal the better damage to all of them. Most explosives have a blast radius of 20'.

Group Fire
Firearms that are full-automatic or shotguns can hit additional opponents adjacent to the target. Adjacent opponents save vs Dex or suffer the weapon's damage.

Firing in Melee
Attacking an opponent with a firearm that is adjacent to you imposes disadvantage on your attack roll.

Sights
You can equip a rifle with a sight, which grants advantage on attack rolls from long range.

William the Fighter, Zeff the Scoundrel, and Rogal the Wizard awoke to another sunny day in no-name Brinsby. After a light breakfast they shuffled their feet to the carnival grounds, along with all the other adventurers bumming around Brinsby, bought their tickets, and made a beeline to the main attraction: The Maze of the Blue Medusa. They handed the Ticketmaster his due and hopped in the painting, expecting to see the red room of the Chanterelle on the other side.

Instead of finding the familiarity of the red room and the insults of the Chanterelle on the other side, the party found themselves floating near the ceiling of a bar looking like the cantina from A New Hope. They fell, crashing into a table and interrupting the card game of some weird looking aliens.

The aliens looked humanoid except for their one bulbous eye, yellow skin, and oversized heads. They were all wearing wife-beaters, torn jeans, and leather jackets.

"Oh, you hear that felas?" the talkative alien turned to his friends. "They're sorry. Well, let's show them what sorries are worth in Gathox!" With that the four aliens pulled out a baseball bat, a gold club, a nail-ridden two-by-four, and a pistol-shaped object the party never saw before.

A fight broke out, the bar-goers gathering around in hoops and haws, and William decapitated the talkative alien with his great sword while Rogal attempted and failed to petrify the other one. Zeff ended the fight with a well thrown flask of burning oil, igniting two of the aliens and sending the last running.

"You'll pay for this!" yelled the fleeing alien. "No one crosses the Kermens and gets away with it!"

The party decided to let him go and Zeff swiped the pistol-shaped object while no one was looking.

The bar-goers patted down the remaining flames, leaving the Kermens' corpses where they lay and went back to their business. William approached the bar and grilled the bartender for information. The bartender was a human with two-heads that took turns chewing on a bright red root.

The party learned they were in a city called Gathox and that the bartender really hated dealing with newcomers and that they should head across the alley to the Dohjak Friendship Hall if they wanted more info.

The party left the bar and climbed the stairs leading outside and saw buildings stretching higher than they had ever seen, looking like blocks of concrete and metal stacked on top of each other accentuated with hanging gardens and piles upon piles of trash.

After their awestruck, the party headed across the alley and found the friendship hall. It was a squat four story building constructed from flagstones and presented a facade that looked like a striated cliff face. They knocked on the double doors and a short fat bald human answered. His skin was tinged with a slight purple and he wore a pink toga and silver leaves in his big beard.

The party introduced themselves and the man introduced himself as Mehlud and the particular owner of this friendship hall. He invited them inside. The interior looked like an abandoned disco roller rink.

Mehlud gave the party the run down on their situation, that Gathox ripped through space and time to snatch them up and trap them here, that they would have to fight to survive on its streets, and that they would probably never see home again.

The party took it in stride.

Mehlud gave the party some gold and suggested they visit Larry, another Dohjak, to arm themselves with a proper piece and come back because he might have some work for them.

The party went to Larry and purchased a rifle and two SWAT helmets. Larry also taught them about guns. Zeff learned the pistol-shaped object he stole off the body of that Kermen was a lazer pistol. William wanted to sell Larry his old crossbow but he was only interested in modern tech and gave him directions to a guy named Berling who would buy anything.

Armed and ready, the party returned to the hall and discovered Mehlud doing a line of some red powder, which he violently sucked through a straw into his nose.

The party learned about the drug Sho-Maht and all except William joined Mehlud in another line. They also learned the Dohjaks buy the drug from the Elven Kings in Berchan Favela and distribute it throughout the Kettle.

Afterwards Mehlud told the party about how periodically Gathox will swallow buildings only for a new one to rise up in this place. When this happens friends from across the city wheel and deal for control of the new territory. Negotiations are peaceful until someone gets impatient like Mehlud. He tasked the party with clearing out a new property by the name of the Muddling Mansion and offered them 2,500 silver pieces as payment.

After a night's rest the party crossed town.

They crossed a corner and bumped into a weird creature that looked like the love child of a preying mantis and a centaur. It held two leather tongs in its clawed hand that connected to collars worn by two humans that wore nothing but loincloths and belts.

William heard the creature speak to him through the voice inside his head.

"You're a fine specimen," the creature said. "I must have you in my collection!"

A fight broke out. The creature cast an array of magic at the party and its two slaves fought loyally. Its chitinous armor was tough but some well placed strikes slayed it. They picked its pockets and Rogal decapitated it to learn its magic later.

The party arrived at the Muddling Mansion: a three story building comprised of adobe clay and solid blocks of trash. They prepared to enter.